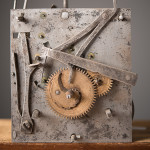 Dear child has many names. There are many ways to describe clocks standing on the floor and the three above are the most common. The Mora clocks were the eighteenth and nineteenth centuries fashion and statement piece. The Mora clocks stood in both in wealthy country homes and big mansions. They were a luxury item and the nicer the body and painting the wealthier the owner. But few clocks were used for their intended function. For the most part the clocks were used as decoration and not time keeping. They were furnishings if you will

General About Mora Clocks
There are few pieces of furniture that are so characteristic as the case of a Mora clock. Every part of the country has their own typical stylistic features and painting which makes it easy to today place the case geographically.

The clocks started to pop up in the upperclass homes during the mid-1700s. The clocks were very popular by the end of the 1700s and all the way in to the mid-1800s, not just in the wealthy homes but in the country home as well. After the 1860s the clocks began to drop in popularity and the production slowed and almost came to a stop.

Production In Mora
The production of clockworks largely took place in Mora, Dalarna. And it wasn’t one craftsman alone that manufactured every piece to the clockwork. Instead the work was spread out on multiple people who each had a part in the process. For example, some made the cogwheels while others wrought the pendulums. There was even a specific group that handled sales. All experts in their own areas and all working together to make the process as smooth and efficient as possible. They could manufacture complicated clockworks that could tell the date and ran for over a week before you had to rewind them. As well as simpler ones that only for ran 24 hours before you had to rewind them.

The clockwork manufacturing wasn’t just in Mora but in other parts of Sweden as well. But the production in Mora led to people associating the clocks to the village. The name spread when the clocks became known and sold all over the country. Hence the name Mora clock. It was also common to buy the clockwork from Mora and then let a local craftsman build the case and another to do the painting.

Paint
The more money you had the more you could spend on decorations. Decorations such as carvings on the case or a more detailed paint job. The paint itself can also give details about the clock and its owner. Blue, grey and other light colors were very expensive and therefor only the wealthiest of people could afford it. Red paint was less expensive and is therefor much more common. That applies to all furnitures not just clocks.

Our Mora Clocks
We only sell Mora clocks as interior design objects and not as functional timekeepers. The clockworks are old and none two are exactly the same. Getting them to work after being inactive for years can therefor be unexpectedly tricky. The original state of the clockwork and its surroundings are difficult replicate. Conditions such as the tilt of the floor or the assembly of the clockwork can even mean the clock runs in one place but not the other. Some clocks can run for a few hours or days before stopping while some don’t run at all. We therefor give no guarantees on the clocks’ function.

Once In Your Home
A few practical tips. It is a good idea to fixate the clock against a wall. The tall narrow cases risk to tip over but a small screw attaching the back of the clock to the wall is enough to keep it upright. If the clock is in need of cleaning use a damp cloth to sweep it over. Do not used any strong detergents on the painted areas. 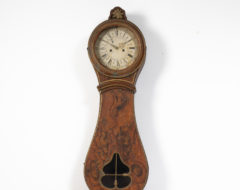 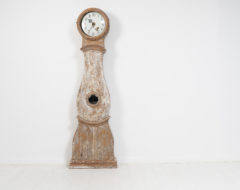 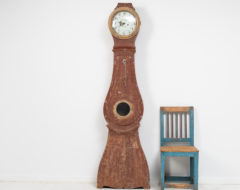 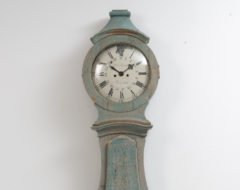 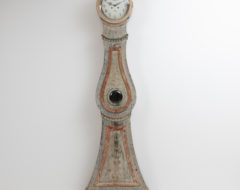 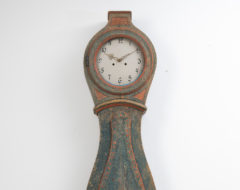 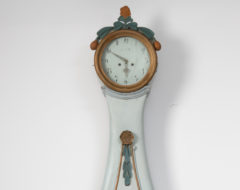 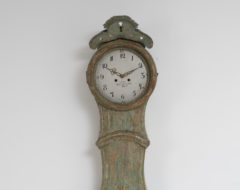 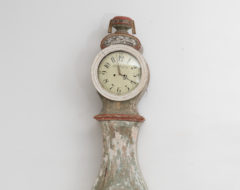 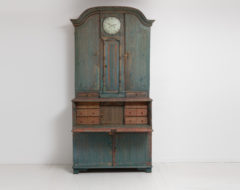 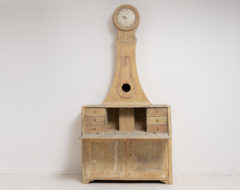 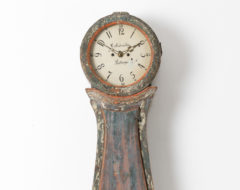 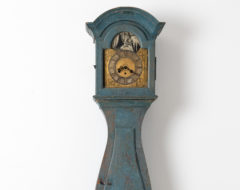 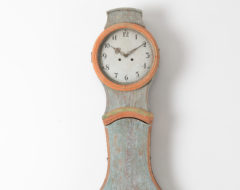 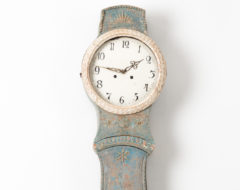 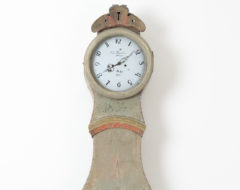 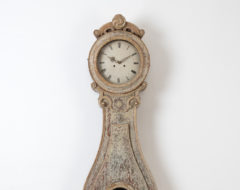 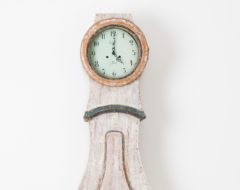 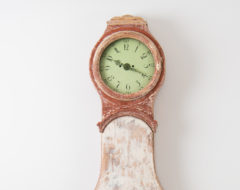 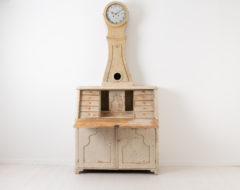 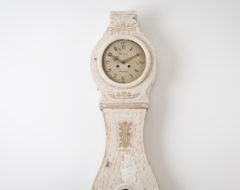 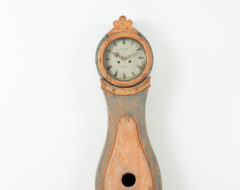 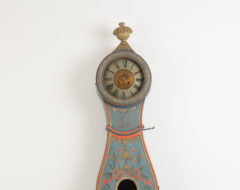 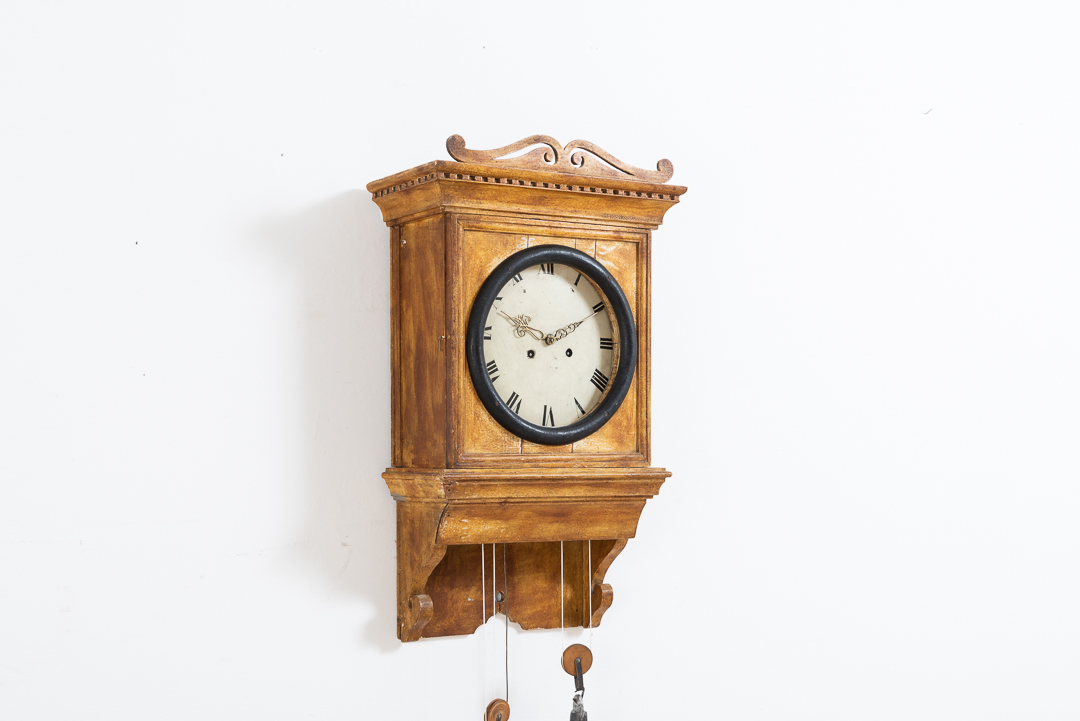 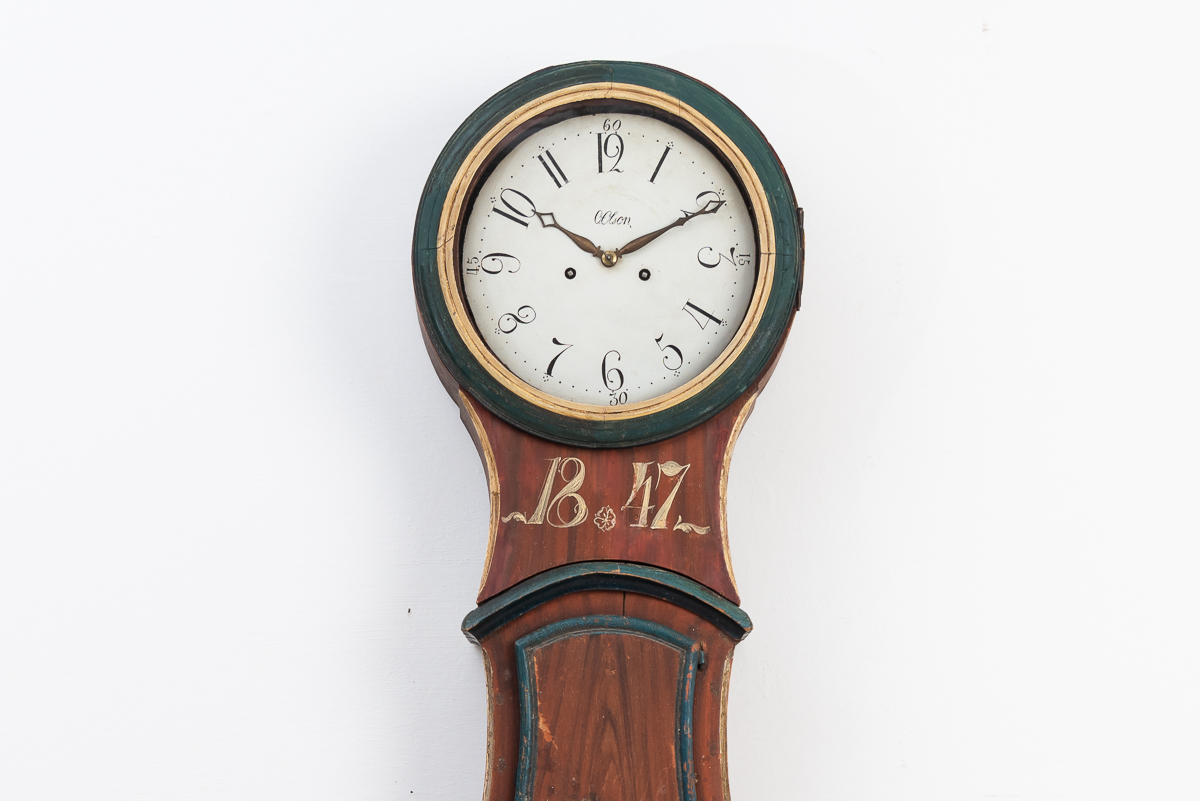 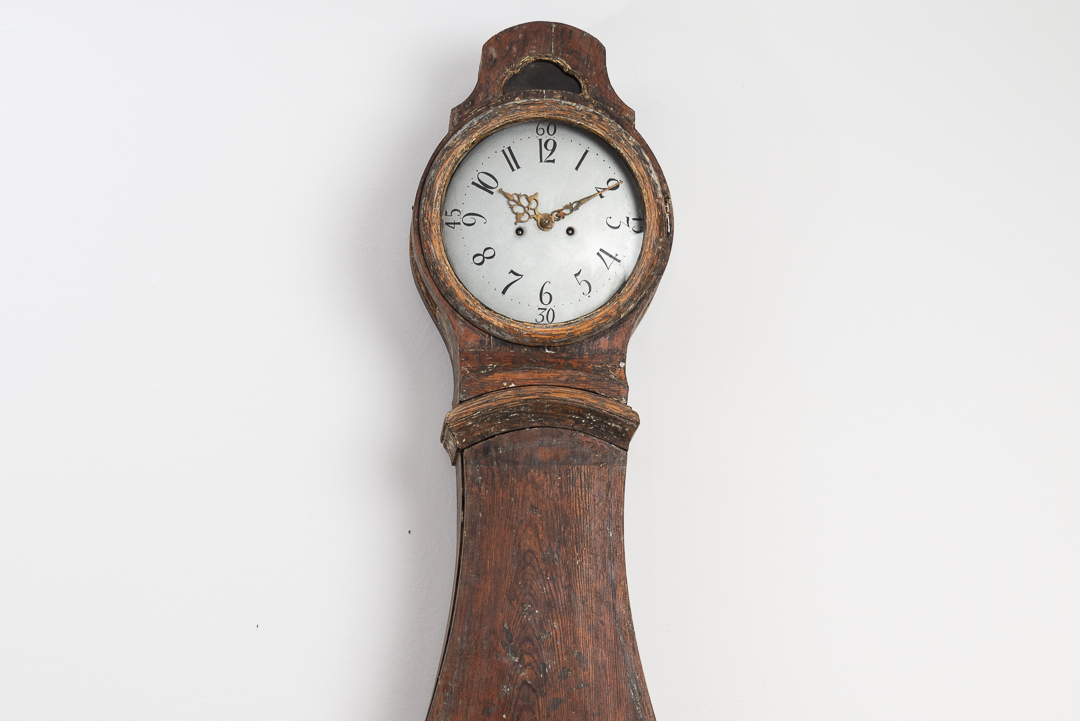 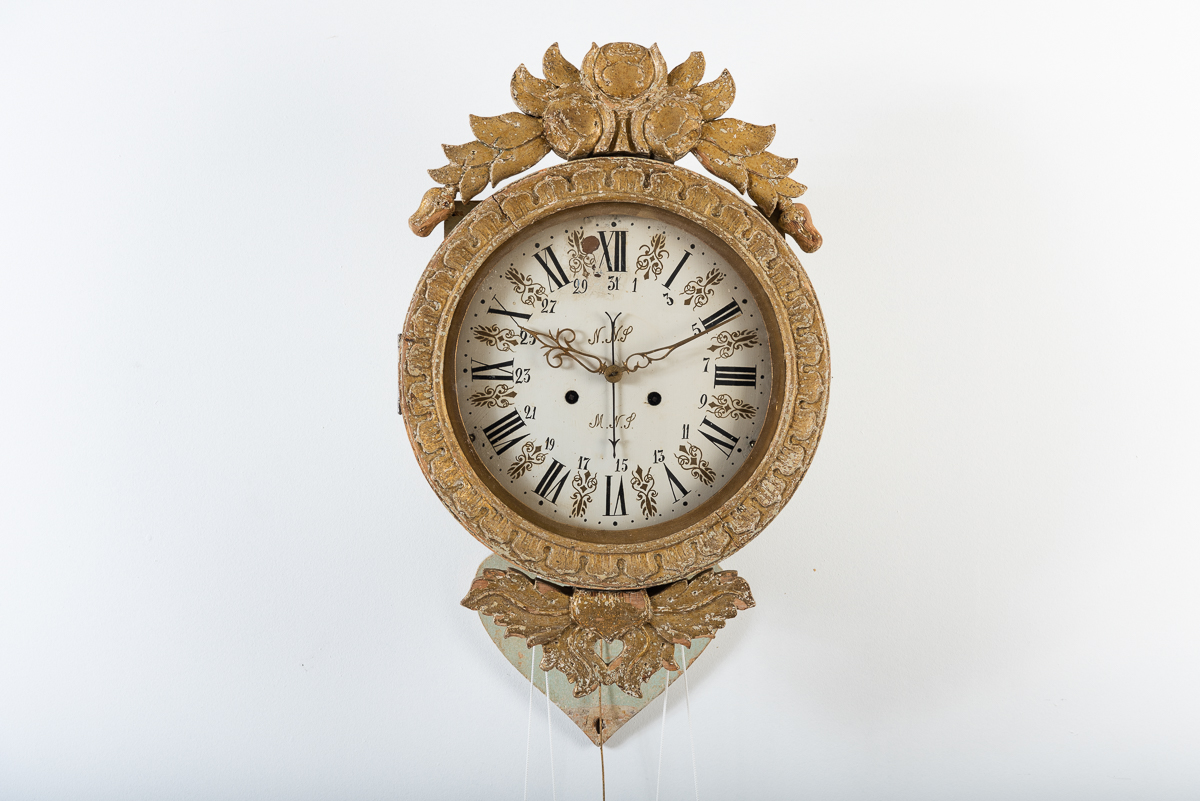 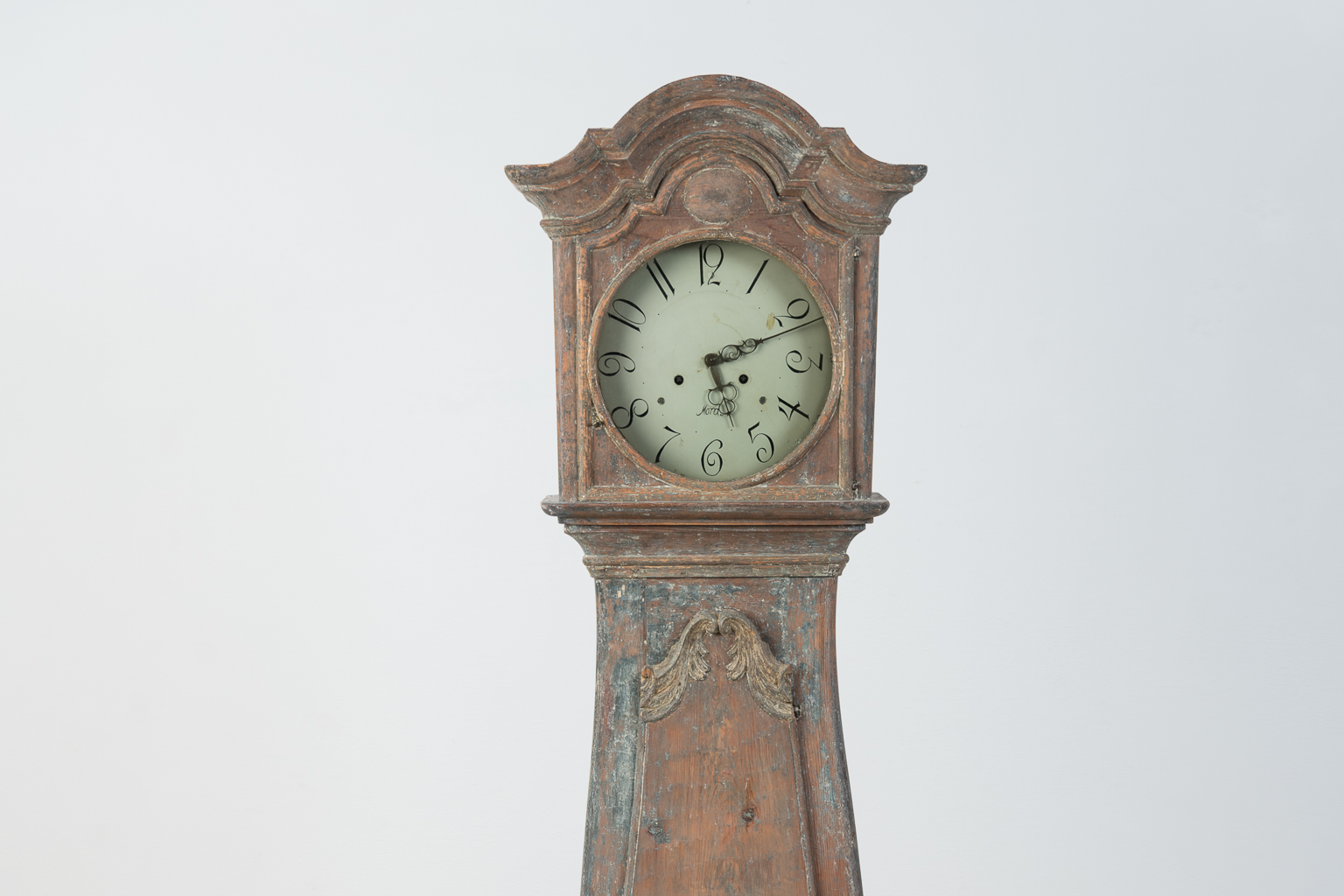